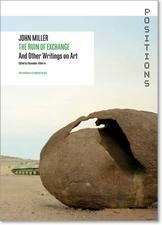 The texts in this collection of John Miller's writing and criticism span a 20-year period, 1989 to 2009, and are divided into four sections: monographs, cultural essays, theory, and artist's statements. Many appear in English for the first time. Throughout, Miller aims to question artistic and curatorial theories and practices from the singular position of an artist-writer. This makes the production/reception issue an inherent dialectic in his work.
Miller sees criticism as part of a comprehensive practice that includes teaching and, of course, art production. His approach differs from that of the academic or the journalist in that he implicates his own practice in the object of his critique. Moreover, rather than evaluating that object, Miller tries to articulate how it operates within a given political economy. He maintains that sociopolitical forces and ideological apparatuses underpin the production of all cultural "artifacts."
Miller synthesizes a critique of representation via a post-conceptual shift to the "real." Using vernacular modes such as genre painting and the snapshot, he has examined the pictorial as a particular ideological framework. Following a phase of "normative" picture making, Miller shifted to a pseudo-apocalyptic mode in the late 1980s. These brown impasto works made clear that the artist's critique was first and foremost a means of revealing the repressive aspect of value production in late-capitalism's day-to-day operations. More recently, Miller has entered into a close and sustained dialogue with Dan Graham and his work. His criticism is also shaped by ongoing conversations with Robert Nickas and Nicolas Guagnini. Since 2002, he has added making music to his artistic output, collaborating regularly with Takuji Kogo under the rubric Robot, and with Jutta Koether, Tony Conrad, and Greg Parma Smith as XXX Macarena. Miller has exhibited his various groups of work widely in North America, Europe, and Japan. In 1999, Le Magasin in Grenoble featured a mid-career retrospective of his work; in 2009 the Kunsthalle Zürich organized a second survey.
The book is part of the Positions series, co-published with Les presses du réel and dedicated to artists' writings.